Architect Oleg Klodt: “We do not know how to live in this new world of technology” 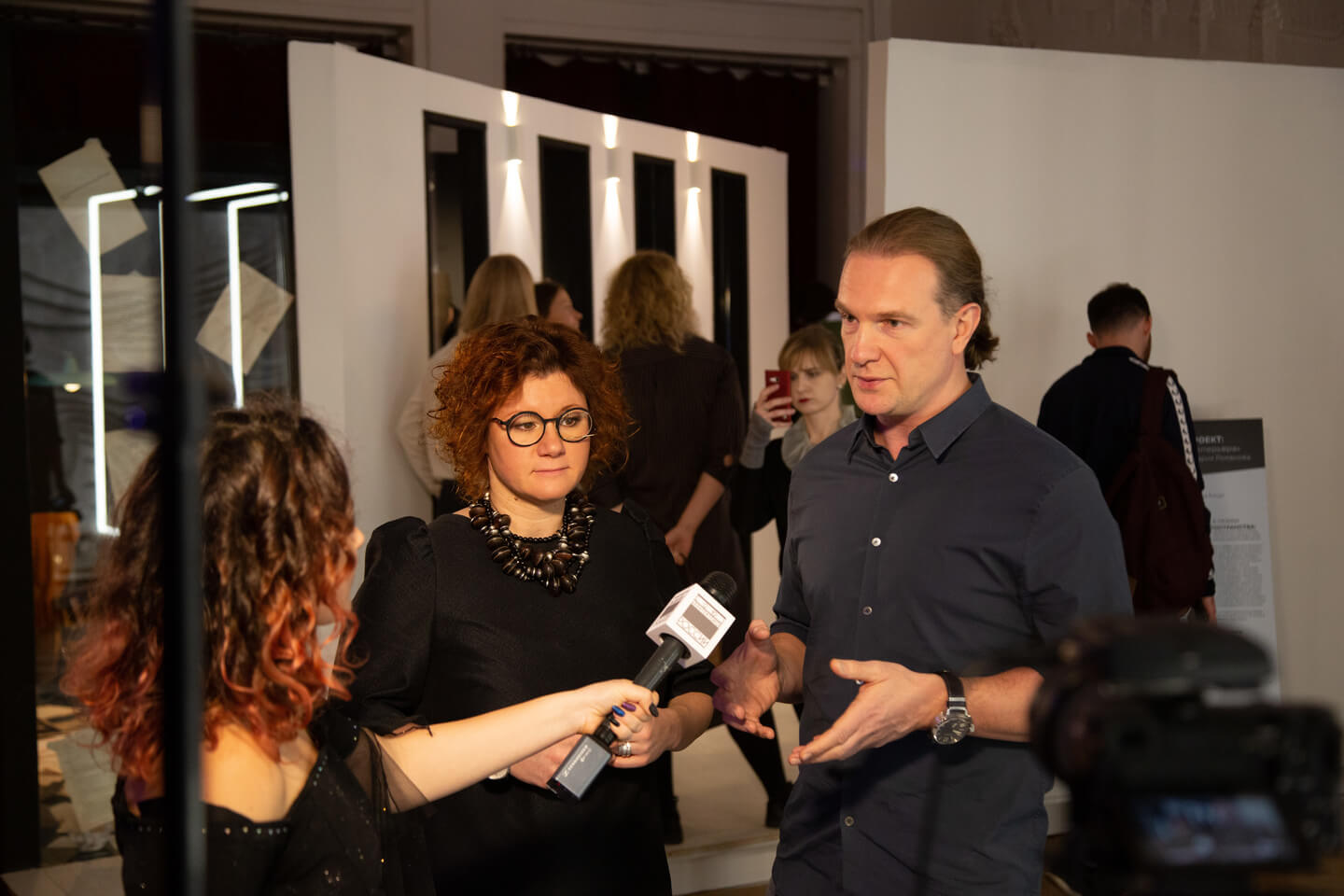 22 of November was the last day of the annual Best Interior Festival at the House of Architects. Archi.ru spoke to one of the laureates of this festival about metaphors in interiors, boundaries of love and technology in our life.

What is the meaning of your installation as part of the “Current interior theatre” exhibition project?

Oleg Klodt: This conceptual installation, developed by our team consisting of Oleg Klodt, Alexandra Klodt, Anna Agapova and Alla Yaskovetc is all about contemplation of boundaries in love. At the same time, we tried to move away from purely gender orientated perception and tried to be philosophical on the universal scale as well as within the modern technological context. The idea was born very quickly from a simple contrast: The good old world where feelings thrive and the world of loneliness, where technology rules and where we are constantly challenged by the new virtual reality. This contrast was depicted in two zones, black and white. 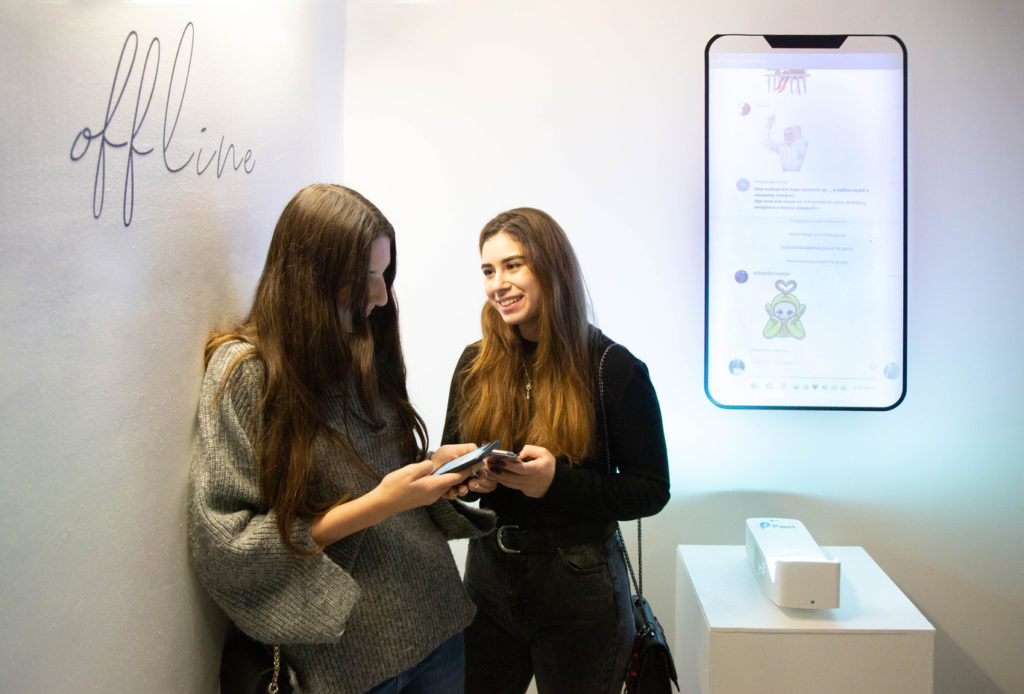 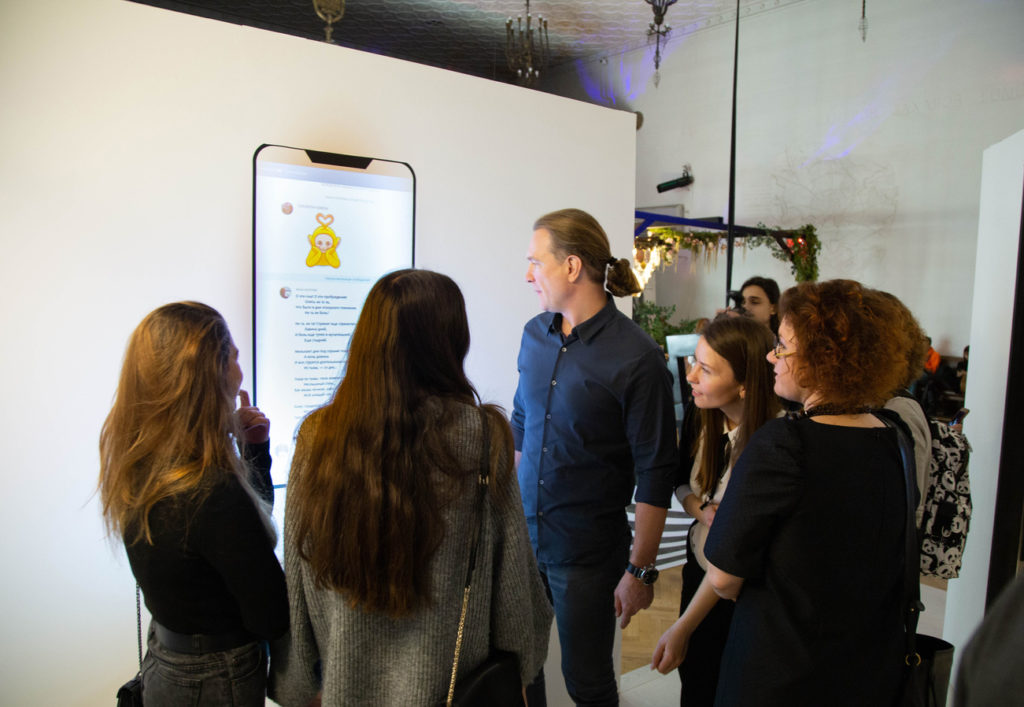 Would you tell us about the content of each zone?

О.К.: The white space is the metaphor for emptiness, life without love where everything is bland and soulless. The image of an iPhone with an open messenger projected on to the white wall is the symbol of the modern world. Today the distance between us is an arm reach to our smartphone. Countless messenger apps create an illusion of emotional closeness, allegedly filling the emptiness, but they do not satisfy the most important need for love and human affection. The black room is the world filled with feelings that are alive in letters, literature, history, real people and fictional characters. Here projected onto a black and white screen is a selection of old films, documentaries and screen versions of epic works whose characters wrote letters and spoke about love. We tried to demonstrate how love moves through time and space and echoes in our hearts through films, books, diaries and memoirs. Life is present here. The person in the black room is a writer, screenwriter and film director. He is a creator comparing the stories of others and his own experience, processing them and creating something new. Something that gives us hope, food for thought, strength to move forward and faith. 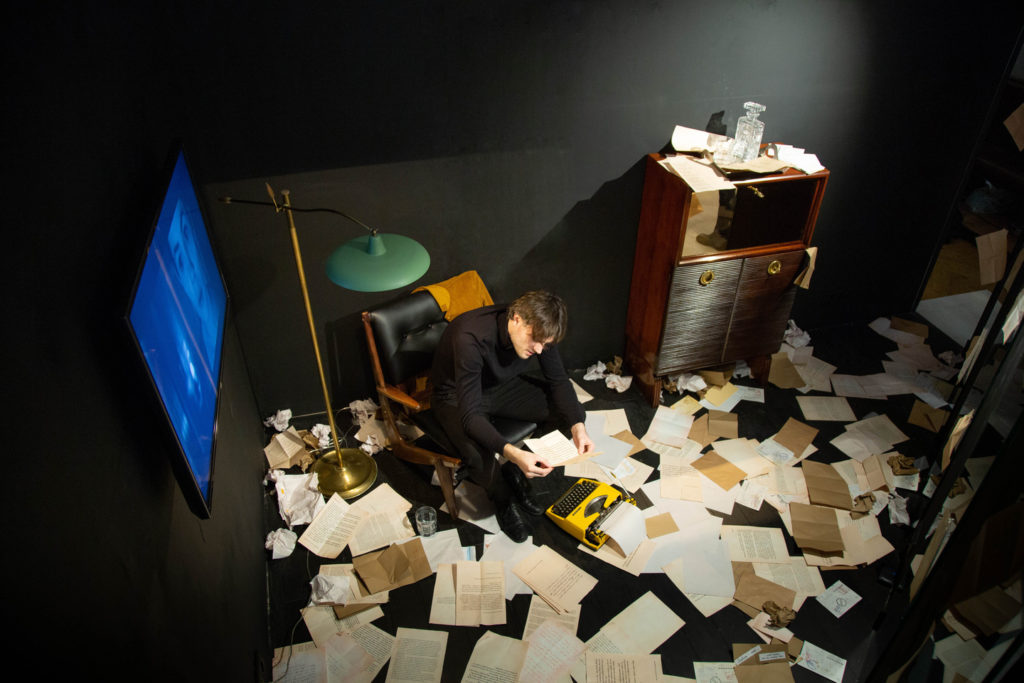 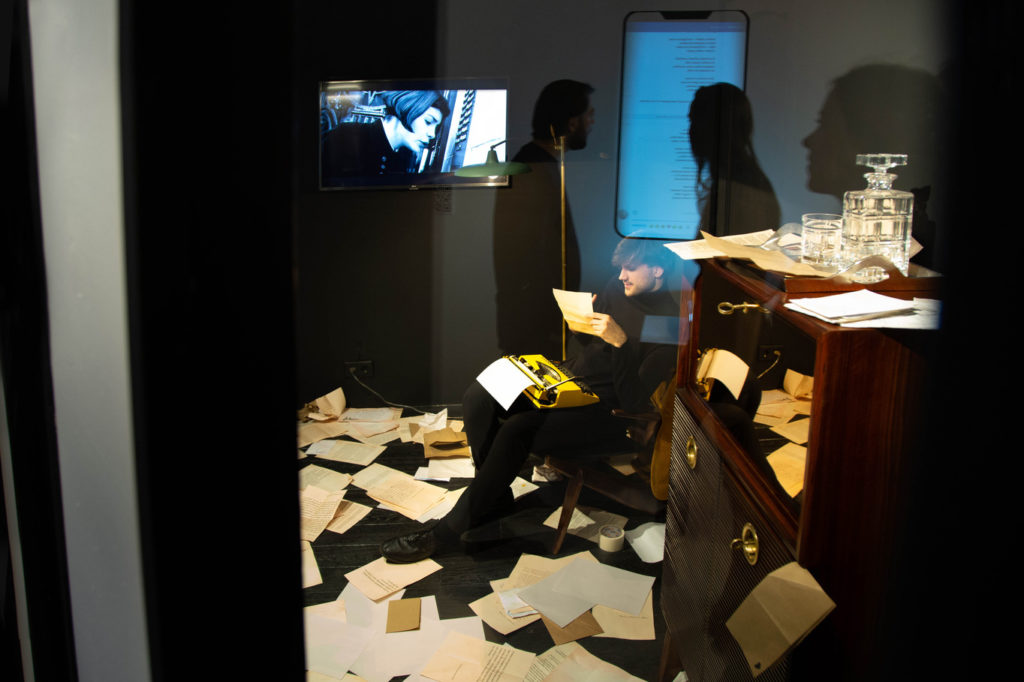 What is the main idea of the project?

О.К.: The idea is that there is no black and white. We have a problem, we do not know how to live in this new world of technology, or to be more precise we are afraid. And I am worried about this as a professional and as a parent because my children do not know a world without the internet. We have forgotten how to contemplate. We are constantly wearing headphones, looking at our phones and chatting online, not allowing our brain to function properly. Once I took part in a public discussion with a well-known Russian film director Timur Bekmambetov on the subject of the “cities of the future”. Timur said that the scariest film would be the one about the day when the internet is turned off. And it is not only because we will not know how to get home because we are so used to the navigation, and not that we will be unable to find each other because we no longer remember phone numbers. It is because we will not know how to meet people, how to love, form friendships and express our feelings. Today the messages are unified, and the words mean everything and nothing at the same time. One can fall in love online, get married online and then delete each other from one’s life by pressing the “block” button.

Is your installation just nostalgia about the past?

О.К.: It is reflection rather than nostalgia. We wanted to demonstrate that the real value lies in uniqueness and individual purpose. And this is what is lost today and replaced by text messages and emojis. We no longer have the right to anonymity. Everything is stored on a server somewhere. More importantly, when sending a message, you can no longer be sure about it being private because it is so easy to press share or make a screenshot and make something deeply personal public. The subject of the festival is “Overcoming”. And we built our concept on the opposition of the two worlds, both of which exist here and now. The question is, how can we integrate them into each other, take everything good from the old world and bring it into the new one. This is what overcoming is all about; it is a choice everyone has to make daily. And as creative people, our job is to find ways of integration and teach our children to live in this new world and write the rules of the game. 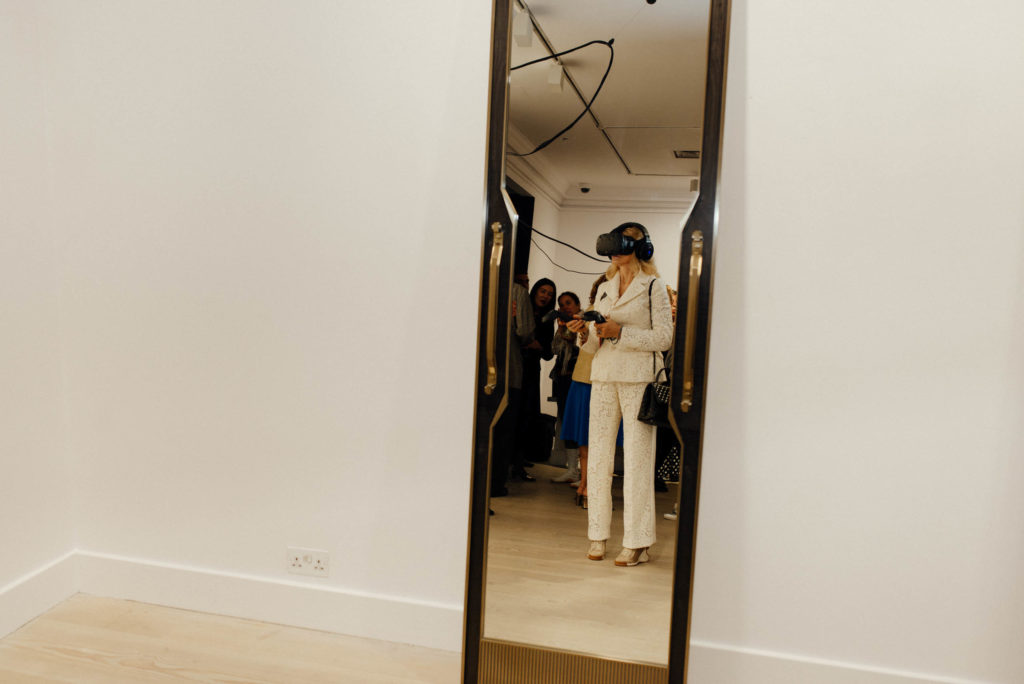 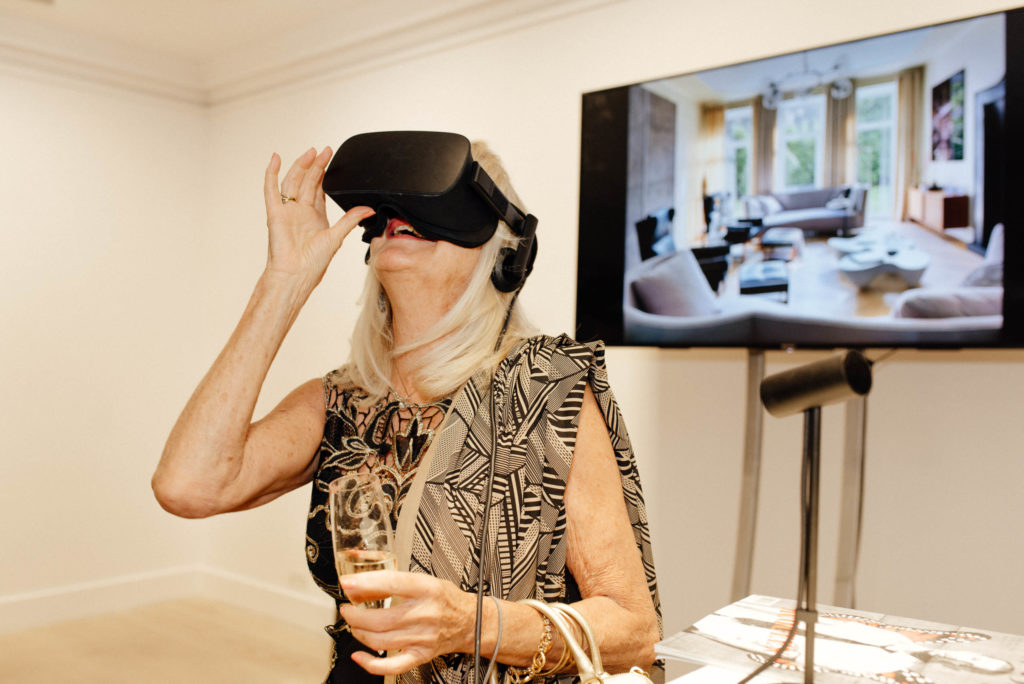 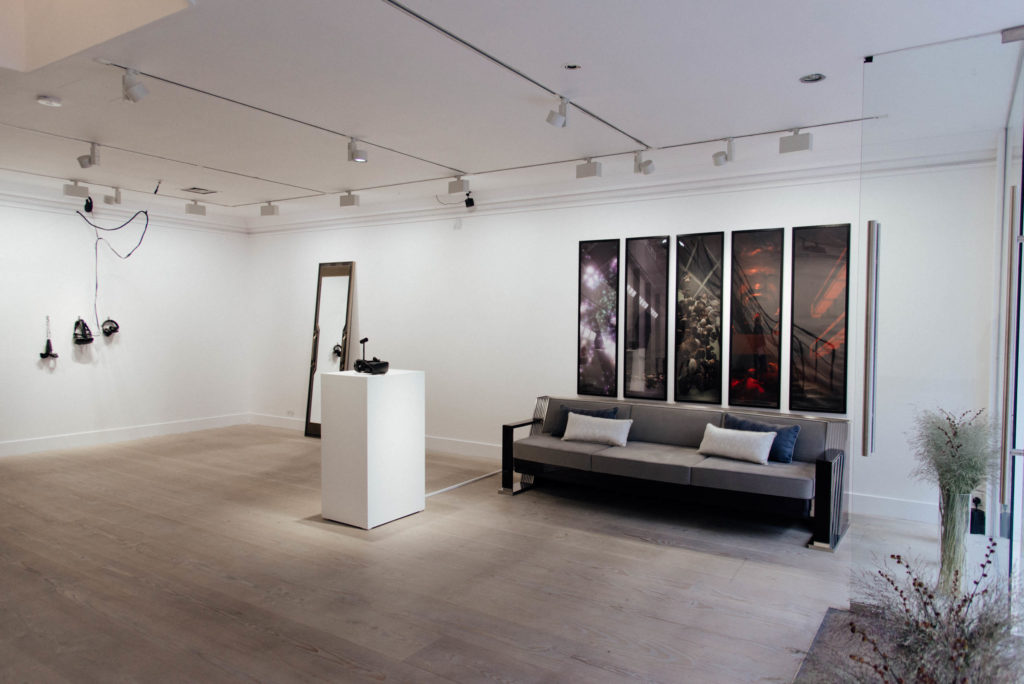 What can you say about modern interiors in the context of new technology?

О.К.: I will give you an example of an exciting project. Exactly a year ago at the London Design Festival, we presented our exhibition project “After Space” together with modern artists working in the VR format. This was an attempt to explore how VR changes our living spaces and our minds. We often provide a service to our clients where we assist them in choosing artwork, and today VR is gaining popularity and is more and more in demand. It is a new form of art which is replacing classical paintings in many homes. And it is not just about fashion but also about the new way of thinking. These works of arts can easily be taken anywhere. People move around more and more, and there is no need for large houses filled with expensive items. We really felt it when we opened our office in London two years ago. The attitude to interior design is completely different now. Expensive items still feature, but the interior itself is designed in a different way.

Why is it so important to take part in the festival?

О.К.: Today the BIF is the only festival of its kind in Russia and acts as an exhibition and educational platform. It is a good demonstration of what is happening in this profession. We expressed our views about the subject that concerns us, but there were so many other valuable thoughts and contributions from other professionals who work here and now and shape our future. Thirteen architectural atmosphere installations were shown as part of the “Current Interior theatre” project. 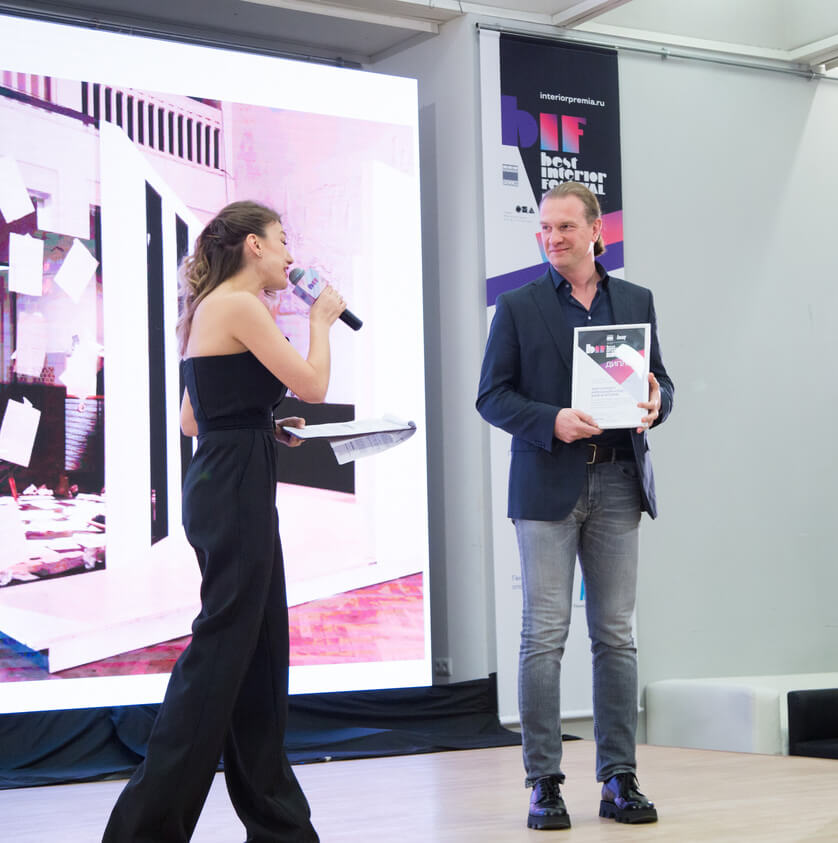 Architectural installation by Oleg Klodt’s architectural Bureau received a special award by the Architects Union of Russia “For the architectural and philosophical reflection of the problem of IT progress’ effect on interpersonal interactions”.

Best Interior Festival The Union of Architect of Russia

WHAT HNW CLIENTS VALUE MOST WHEN CHOOSING AN INTERIOR DESIGN FIRM